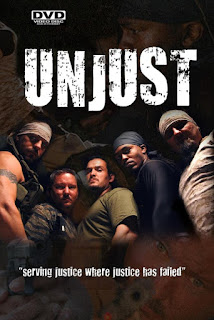 They were once a close group of Special Forces operatives who worked together behind enemy lines in the Gulf War, Somalia, Bosnia and flash points across the globe. They were sent as the remedy to War Lords, thugs and others who threaten to break a fragile peace and stability. Their missions were justifiable, remove one to save thousands. Their military careers now over, the Operators find themselves with skills that no longer have any value. Their new civilian world is full of hypocrites, liars and cowards, they are foreigners in place were justice is purchased and the guilty go free. The Unjust are troubled men full of rage. They are angry at their country for using them, angry that they risked their lives and lost honorable men to protect a society full of weak, thankless parasites. Their anger is used by one man to consolidate his empire; this fury is then used against them to eliminate each other.

We aren't sure what any of that means, but that is the show synopsis. David was in two episodes.