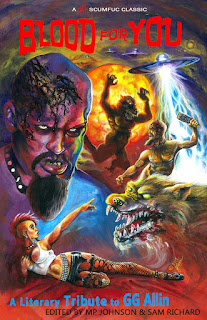 Think GG Allin was extreme? You don’t know the half of it.

GG Allin's exploits are legendary. The music, the shows, the violence, the bodily fluids. But GG Allin was confined to a world where he couldn't fulfill his potential. He punched and kicked at the boundaries, eager for something bigger, something crazier, something much more fucked up. But the real world refused to give him the adventures he needed.

Now, thanks to underground fiction’s most talented scumfucs, GG is cast in a series of adventures that truly befit his outlaw spirit. In these pages, GG Allin is a secret agent, engaging in cult-smashing missions in exchange for dirty sex with George and Barbara Bush. He’s a shit-eating, spaceship-piloting and time-traveling savior of humanity. He’s an orisha, called upon to save prisoners from ‘roid rage mutant guards. He’s one half of a deepfried onion ring ouroboros with his soulmate John Wayne Gacy. He’s thousands of clones living inside your giant robot body.

Get ready to see GG Allin like you’ve never seen him before!
Posted by David C. Hayes at 2:00 PM No comments: