Chased out of the old world, the dark vampire lord Giovanni flees to the American southwest where he sets up a new brood. Longshank, Brittan's premier vampire slayer follows him here, and in a final confrontation in the Arizona desert both are killed. A hundred years later Melissa, a gorgeous, goth, lesbian college student, is obsessed with becoming a vampire and escaping her terrible home life. Along with her four friends, Ted, Liz, Mona, and Kent, she regularly conducts ceremonies where she tries to commune with dark forces. When she buys an old, evil book at a creepy garage sale she finally has the key she has been searching for. Following her dreams of Giovanni and a map in the book the five friends hike out to "Massacre Lane" and finally summon up some real vampires. 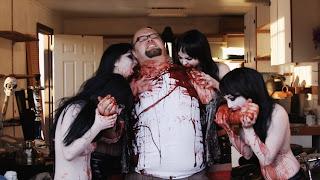