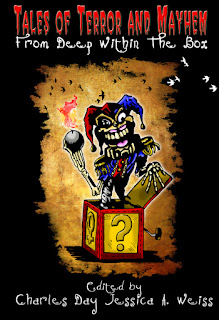 From Tracy Carbone, critic, "I was fortunate enough to be asked preview a copy of Tales Of Terror And Mayhem From Deep Within The Box, edited by Charles Day and Jessica A. Weiss. This will be released by Wicked East Press mid March and will make a formal debut at the World Horror Conference in next month.

The collection of stories from writers spanning the globe was an eclectic mix of suspense, classic horror, revenge stories, and even some with a Grimm’s Fairy Tale feel. They were many good stories in this anthology but I will just touch upon my favorites.

In no particular order, I start with “” by Jon Michael Emory. To me, Jack in the Boxes are scary.  But this author weaves a tale that is literary and a little sad. It has its spooky elements but first and foremost it’s a solid little story with a twist I didn’t see coming.

Jeremy C. Shipp’s “Balloon Boy,” “Grindylow,” by David C. Hayes, and “The Gift,” by Charles Day & The Evil Little Jester (edited by Hollie Snider), all send us supernatural (and sometimes wickedly evil) beings to take care of the villains plaguing the underdogs who sorely need help. Shipp’s evil clown friend, and Day’s Jack in the Box Jester manage to be thoroughly creepy but still will win the hearts of readers. Who says the good guy can’t be a demented clown or jester? Grindylow’s monster that was formed from tears was a beautifully symbolic creation to punish a neglectful parent."