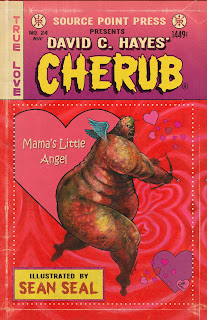 Just in time for Valentine's Day.

He wasn't like the other boys. Too rough. Even on the day he came out of Momma's belly. When Momma died, though, they sent him away to a terrible place. A doctor place... but the people there didn't act like doctors. They called him Cherub and they made him do awful things. Wet things. Hurty things. Until he met his angel, that is. She made it better and the pain went away. For awhile. Nothing lasts forever except a mother's love.

"David C. Hayes is back with Cherub. If you are familiar with his previous work, you know what you're in for. If not, then get ready for a ride through the absolute worst in human nature. Hayes has the unique ability to convey the most sickening acts in a way that will have you laughing between retches. Once the book closes, you'll need to shower and after that you'll wonder what it says about you that Hayes managed to touch so deep and dark. You will be affected." - CinemaHeadCheese.com.