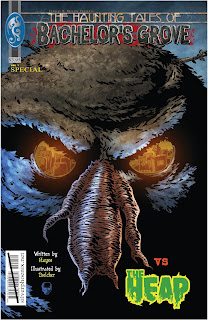 We are all monstrous. I mean, inside, we all have a darkness that can manifest itself. That is what draws me to the creatures that populate the funny books. Especially the muck monsters. Every one of them, Swamp Thing, Man-Thing, Bog, Theodore Sturgeon’s It… they all feature the physical manifestation of that darkness. Furthermore, none of them asked for that darkness to be made real. And, each of them use those black pits to further whatever their personal concepts of justice may be. That is the dark heart at the center of these characters: they are horrendous avatars of justice, meting out punishments in varying degrees. The one that started it all, at least in terms of comics, is the granddaddy swamp creature himself: The Heap.

The Heap started in the pages of Airboy in the Golden Age of comics. A World War I pilot in life, and downed in the swamps, the German airman through sheer will becomes the shambling, hulking mass of putrescence, The Heap! The Golden Age Heap joined Airboy on various adventures, delivering brute force in mute fashion and turning the tide of the second World War. Languishing in obscurity for some time, Skywald brought a more horror-based Heap to life in the pages of Psycho Magazine in the 1970s and a modern version of The Heap debuted in Spawn for Image in the 1990s.

His muck monster brethren have gone on to comics, television shows, action figures, feature films, and much, much more. The Heap, though, never had the chance to turn over a new ‘leaf,’ pun intended. That is what Kurt Belcher and I hope to do here.

Now, assuredly, Mr. Belcher and myself will probably never be called up to the big leagues where the various Things live and one may say that The Heap is serving as a surrogate in that regard. In some sense, that is true.

But, it is also true that the tragic tale of Baron Eric Von Emellmann is one that shouldn’t be forgotten, either. Alec Holland and Ted Sallis don’t have a stranglehold on tragic transformations and a thirst for justice. The good Baron is still with us, roaming the swamps and marshes, venturing into the cities of man. He still has many stories to tell and much justice to mete out.

Fret not, dear reader, The Heap walks among us again! 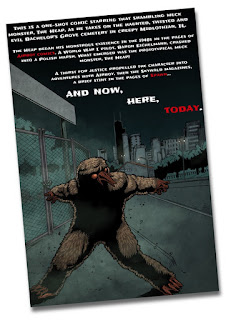