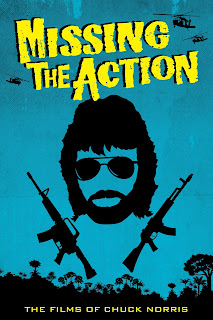 Collected from across the nation, over forty writers, film critics, academics, artists, filmmakers and editors tackle the complete film oeuvre of action star Chuck Norris. The swift kicks to the head, from Bruce Lee all the way to the Texas Rangers, knocked some sense into American action fans for almost fifty years. Beloved, hated, feared, misunderstood, ignored, Chuck Norris is a meme-worthy icon and the subject of innumerable internet jokes, but that doesn't explain how this all happened. In examining Chuck's films, maybe this eclectic group of professionals can answer those nagging questions. Regardless, Chuck Norris performances are always... Missing the Action.
Posted by David C. Hayes at 11:20 AM