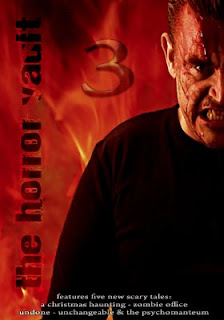 Buy or Rent The Horror Vault 3 on VOD!


"Undone" is the next movie on the chopping block and is the one that stands out of the bunch with a concept that could have actually made it a successful stand-alone title if it were a feature length film. It's about Travis, a man who is consumed with grief over the death of his daughter by the hands of a pedophile that is known as the Lollipop Killer. Thankfully the killer is safely locked behind bars but a friend of Travis decides to help him out and brings him his daughter's killer and gives him a night to do what he wants before he has to take the man back to jail. What follows is a series of sadistic and cruel torture sequences that includes a screwdriver being hammered into the Lollipop Killer's jaw. and being sodomized with barbwire. "Undone" will definitely be branded with the ridiculous 'torture-porn' label since the story is about extracting revenge through torture. Regardless, the movie provides an interesting concept of what a person would do when being left with a child murdering pedophile, and the results of what a lot of people threaten to do. It's a harsh and nasty little short that doesn't get too graphic but isn't afraid of spilling some blood either. Definitely the strongest title on the DVD. 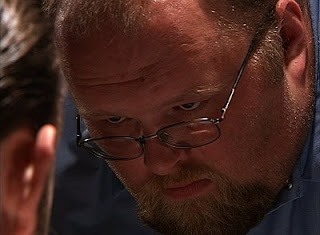