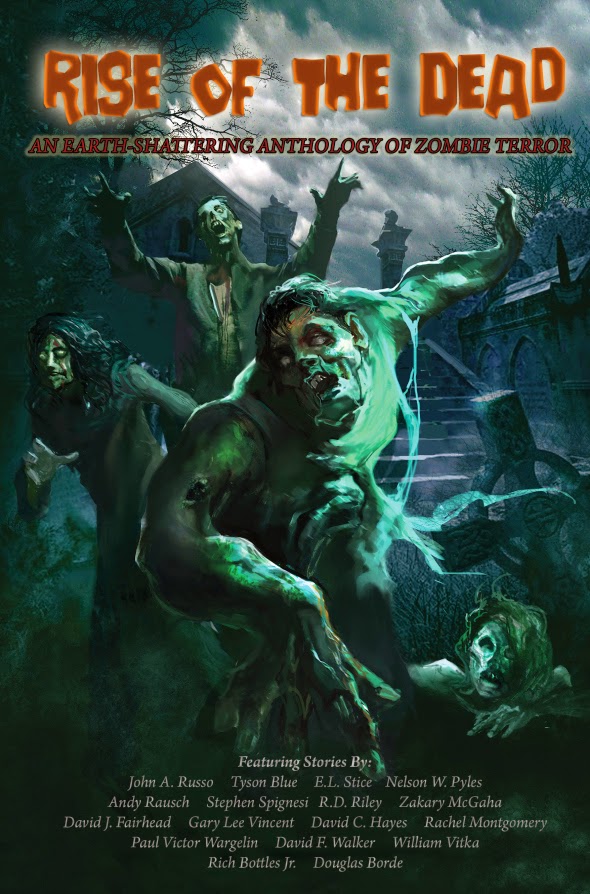 "By now almost everyone knows that the concept of the modern flesh-eating zombie originated in the sixties with Night of the Living Dead. That's why I think that this anthology of short stories paying homage to that fact is a wonderful idea. When I was asked to write such a story, I was told that each and every story in the book would have to take place in or around the time, in 1968, when the horror classic that I co-authored took place…

Perhaps, for you, dear reader, some of the stories you will read in these pages will take their place as some of your very own favorites. Please step back with me into the 1960's – a time of peaceniks, rednecks and unspeakable zombie horror!!"

RISE OF THE DEAD - A collection of seventeen stories from masters of pen and screen, featuring: - The First One by John Russo - Home Cookin by Tyson Blue - The Last Ministry by E.L. Stice - The Turbulent Flight Home by Nelson W. Pyles - The South Will Rise Again by Andy Rausch - Lovely Rita by Stephen Spignesi - The Protest by R.D. Riley - Peace in Peaces by Zakary McGaha - The Commune by David J. Fairhead - Cocaine Connie by Gary Lee Vincent - End Scene by David C. Hayes - Elizabeth's Story by Rachel J. Montgomery - Deadheads by Paul Victor Wargelin - Philbear by David F. Walker - Wrong Place, Wrong Time by William Vitka - Felicity Marmaduke Redux by Rich Bottles Jr. - The Morning After by Douglas Brode
Posted by David C. Hayes at 6:43 AM